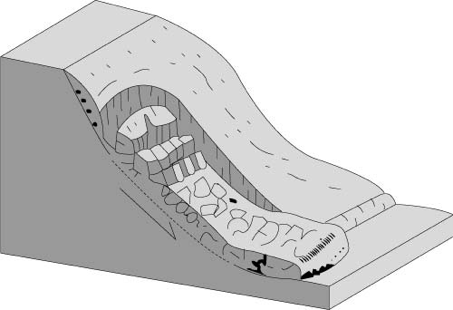 Failure of rock or soil slopes takes place due to natural or artificial means. Natural events include failure due to flash flood, excessive seepage, pore pressure, seismic event, presence of weak discontinuities across the rock slope, shear zones, toe cutting of slope by meandering river leading to unstable slope due to change in slope geometry. Artificial means include events like blasting for road works, un-engineering cutting of slopes by mechanical means.

Soil embankment failure may take place due to improper drainage provisions, surface erosion, etc. If we talk in engineering terms about the slope’s strength and stability, it is measured in terms of the safety factor, which is the ratio of shear strength of soil mass to shear stress. The slope is safe if this ratio is more than 1, otherwise unstable. Shear Stress is increased by factors like self-weight, gravity loadings, pore water pressure, and sliding or rock detaching mechanism. The rock detaching mechanism involves rock joint discontinues, joint faults, decomposition of clayey fills, strain softening, creep under loads, weathering, leaching, etc.

Slope failures depend on the classification and properties of soil/rock, groundwater condition, seepage, and geometry of the slope.

The overlying mass over firm/ better strata tends to slide due to various factors such as an increase in shear stress and a decrease in shear strength. Overlying mass having weak shear strength properties existing below a certain depth up to rock strata, weak soil tends to form a slip surface, and this phenomenon is called translation slides. Sometimes the presence of a thin layer of weak soil generates this phenomenon. Generally, in coarse grain soil, this type of failure occurs in infinite slopes. Once a translation slide occurs, the mass quantity can travel up to long-distance before coming to relaxation.

Rotational failure mostly occurs in the homogenous fine-grained soils or rock of highly disintegrated/ weathered type. The failure surface shows like rotation along the slip surface, and its shape of the slip surface is curved. Failure occurs like a point of rotation of mass movement, which is parallel to the slope and moves downwards.

The failure shows the weak soil layer below the toe, and the failure plane occurs in the base of the slope. The weak soil strata rest on the stiff layer; the base failure depends on the soil classification.

The failure pattern shows the slip surface plane pass along the slope’s top is called toe failure. Toe failure is the most common in base soil is hard in nature.

Continuous seepage, rainfall conditions make topsoil to behave like a viscous fluid. Based on the external and internal stress, the soil flow downwards, even shallow slope conditions, and spread in all directions.

Soil tends to shatter/ dislodge due to the presence of weak zones, fissures. Under these situations, the soil form block or wedge which moves downwards.

Rock failures are generally complex failure due to its anisotropic nature. Failure in rock slope masses governs by the presence of joints, its orientation, and joints’ persistence.

Plane failure takes place due to the presence of a structural discontinuity. It occurs when the failure plane’s dip is more than the friction angle of slope and the failure plane daylight into a slope.

Slide formed by intersecting of two joint discontinuities in line of intersection dipping out of slope face, this type of failure pattern is called wedge failure. Peak and residual shear strength parameters affect the rate if the movement of wedge failure.  Sometimes, the wedge failure occurs very instant, or it can happen gradually over a period of several months.

This type of failure takes place due to the presence of steep discontinuities in the rock, which creates slippage to the rock layers. Here the block/column of rock rotates about a fixed point at the base and move/fall to downwards and outward of the slope. Removal of overburden also generate stress in the rock and can initiate the toppling.

The detachment of any size of rock mass from the top of the slope or cliff where the shear resistance is very low. Once detached, it goes downside mostly by air, sometimes rebounding on the rock surface or collides with other rocks to generate significant damage and landslides. Rainwater infiltration, pore pressure, chemical degradation, or weathering are the main causes of decreasing the shear strength of rock to initiate the rock falls.